"Shimeon’s music is subtle mid-tempo country... It underpins his songs brilliantly and delivers a solid base from which to weave his spells.

it’s a measure of his talent that 'Masquerade' delivers solid songs, rather than weighty sermons." 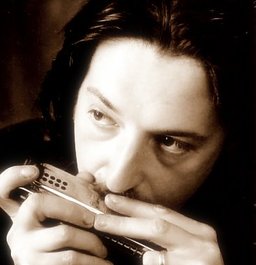 Born in  Manchester,  Simon's childhood reverberated with music and theatre. His musical soundtrack included country, pop, easy listening and classical. Music was a big part of his entire childhood. His mother Joyce Sutherland was a singer and took him to buy his first Banjolele in 1986 and encouraged and guided him into music and he taught himself to play guitar when he was 11. Simon learned by listening to American music fom the likes of Johnny Cash, John Denver, Glen Campbell and later, Roy Orbison.

His parents had met Johnny Cash at the Astoria, Manchester, in 1963 and after seeing Cash in concert In 1988 and Joyce meeting Cash again in 1991 Simon formed his band 22 Strings and they gained a following and a reputation as a live act on the Manchester music scene of the early 90's. In 1995 the band broke up and became a popular duo and ended in 1997.

In 1997 Simon wrote and produced his first album under the name Shimeon Sutherland. In 1998 this album was promoted within the music industry but not to the general public. Simon only intended to promote his songwriting. But after two shows at Warrington Parr Hall, Shimeon decided to continue composing. However, following the death of his father in 1999, Simon hit writers block. But he continued to perform with his band, playing a popular Shimeon concert at Band on the Wall and a series of headline performances at the UK's only Bob Dylan Festival.

In 2008 Shimeon released a debut solo album 'Masquerade'. The album recieved critical acclaim. Due to unforseen circumstances the  album would be re-released in 2010 with a new title 'Dusty Old Soul'. The same year Shimeon also released an updated version of the 1998 album under the title  'Behind the Soomer Sun 'Revived'. In 2010, Shimeon also produced and scored the album Sean Martin "10 Songs" and released an EP "My Heavens in the Sky" with his mother, Joyce Sutherland.

Today Shimeon rarely plays gigs. But since 2012 he has been busy writing, and recording his music, and making none-commercial documentaries to promote his faith and neglected Christian history. In 2012 he released "The Apostles at Paphos". In 2014 he released "Martyr George Marsh". In 2015 he released "The Apostle Paul at Rhodes" and in 2016 "Kos and the Gospel According to St. Luke". In 2020 during the Coronavirus Pandemic, he released "William Salesbury: The Man From Llansannan". These documentaries have been broadcast around the world on Revelation TV and were filmed on locations in England, Walesm Cyprus, Rhodes and Kos. Two of these documentarys are landmark since they are the first films ever made on 16th century Protestant Martyr George Marsh and also William Salesbury.

After simultaneously recording a new album, Shimeon recorded the debut album of his mother Joyce Sutherland. In 2021 Joyce passed away, but not before they had completed the work. These albums are yet to be released.

Shimeon is regarded by many as an  immensely talented, Brit singer/songwriter. He is also a  multi-instrumentalist, and an honest craftsman, a poet and tunesmith and a lover of truth, justice, gospel, honesty and the dignity that lies beneath integrity. His compositions go beyond beautiful music, and cry out for the goodness of life, the desired honesty and plain truth so painfully to the point. Somewhere beneath the integrity of words and composition you know that every last syllable is steeped in sincerity.

Shimeon continues to compose and produce his music and looks forward to releasing the new albums.